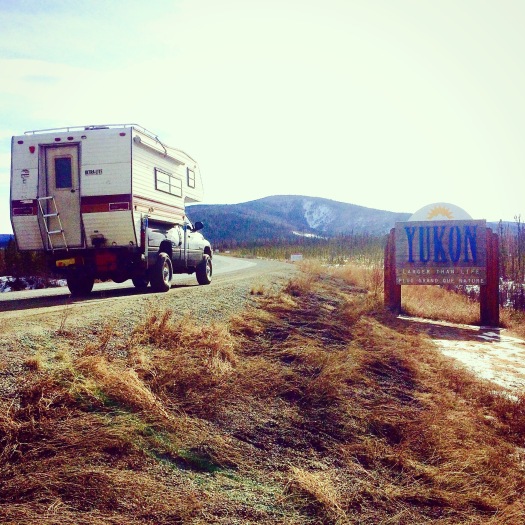 10 Days ago our journey in Alaska came to an end. As we packed up the remaining items in the camper we were a little sad to leave such a beautiful, welcoming state. Alaska will always hold a special place in our hearts, as will all the people and friends we met who made our experience there much more memorable and fun!
For now as we say farewell to America’s largest state, we hit the road once more to explore some new territory! The next few weeks we are making our way down the west coast, slowly heading for North Carolina for our upcoming wedding in June.
A few days before we took off from Alaska we were talking to a fellow diesel enthusiast by the name of Josh Blair off of “907 Diesel” Facebook group. He was looking for a group to travel the Alcan (Alaskan Highway) with as he made his way to the lower 48. People have always said it is better to travel with a other travelers than by yourself in case something happened during the commute down. A few days went by and we never heard from him… Long story short we ended up staying at the same Walmart as he did that same night in Whitehorse in the Yukon Territory! From that day on both rigs stuck together, with Josh’s Dodge Cummins being the lead rig and us following. He was pulling a good size trailer loaded down with sporting goods and photography stuff. His payload was about double ours so he was suffering a little with fuel mileage but the stops for fuel was a good break anyways. 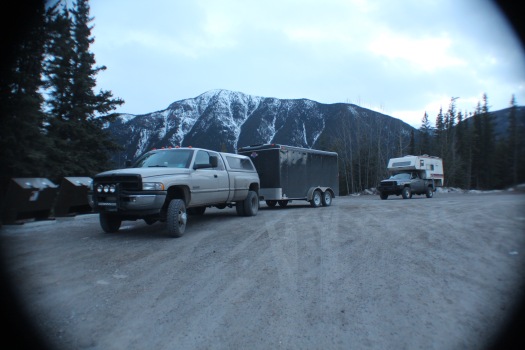 We put in (4) 10hr days while cruising with Josh before making it to the lower 48 plus the previous 12hr drive day before we met up at Walmart. Now folks let me tell everyone right now you’ve never met a funnier or a nicer guy than the one we were traveling with. He has his iPhone on a dash mount and takes videos while he’s cruising but pays complete attention to driving and on the road. Every stop we would ask each other questions about the other persons truck and calculate fuel mileage. He was consistently getting about 10.5-12 depending on how mountainous the terrain was and how often we hit cities with stop & go traffic. We were getting just a hair better at 13.5 to 15mpg but had a lighter load than him. Both rigs in general were some of the best trucks made and proved that with the long haul down the Alcan and other roads we had to take coming down. We hope to stay in contact with him as he is moving to Tennessee which is only one state over from us in North Carolina when we’re not on the road. Josh if your reading this blog THANKS for all the help and advise!
The new-to-us truck camper we bought before we left Alaska seemed to be having several issues while going down the Alcan. First issue we noticed is the roof started leaking up by the bed and front window area when it rained! To fix this we grabbed some “flex seal” and waterproofing duct tape from Home Depot which seemed to fix it for now. 🙂 Next major issue we had was our “black water” tank (septic) apparently had developed a crack from the camper bouncing up and down. We opened the door at a rest area and saw the blue chemicals we put in to break down debris in the tank was all over the floor of the camper!!! Next chance we got we had to empty our black tank and stop using it (still haven’t fixed it yet). After that the final issue we had towards the tail-end of our drive to the lower 48 was the front window by our bed completely SHATTERED while we were driving. It must have been broken for several hours before we noticed because the entire camper front to back was soaked with ice/rain mix and there was glass EVERYWHERE. At first we tried bunji-cording a tarp over the window area which nearly flew off while driving (didn’t even make it 5 miles down the road). Second thing we tried was Cynthia’s idea and ended up working quite nicely was to barricade the front window area with our couch cushions, pillows, sleeping bags, etc (basically anything & everything we could find). That got us to Home Depot just over the Canadian border crossing thank God there was a Home Depot in Bellingham, Washington! We ran inside with just a few minutes before closing time, scouring the aisles for something that would suffice till we got back to North Carolina. We had not one but two guys running around helping us look for something that would put up to 60+mph winds. We checked out Lexan, Plexiglass, Plywood, sheets of metal but nothing was close enough in size or not sturdy enough to work. Plywood was heavy and i had no way to cut it to size. FINALLY we ran across double insulated thick plastic pieces that i could cut with a razor knife. We got some Loctite ultimate adhesive and a tube of silicon for waterproofing and laid it to it. This is still our fix and seems to be working flawlessly and in our opinion works better than the single pane window that we had in it. 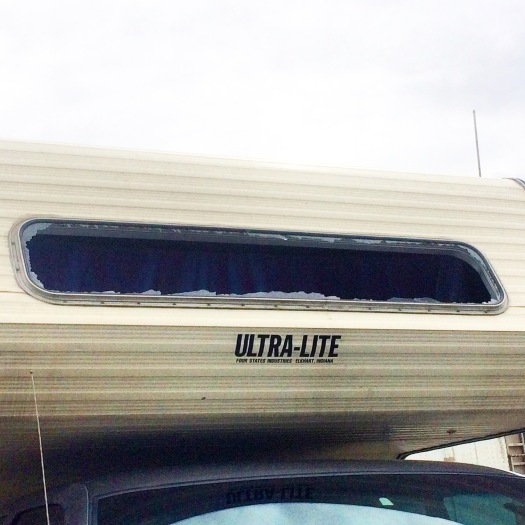 Although Canada is very beautiful, with great scenery, tons of wildlife, Northern lights and a gem of a hot spring that we found! We are glad to be back in the states were fuel is more affordable and the roads are a little bit more maintained. Our camper definitely felt the wrath of the Alcan but is doing just fine for now. We will see how it handles Washington, Oregon and California next! 🙂 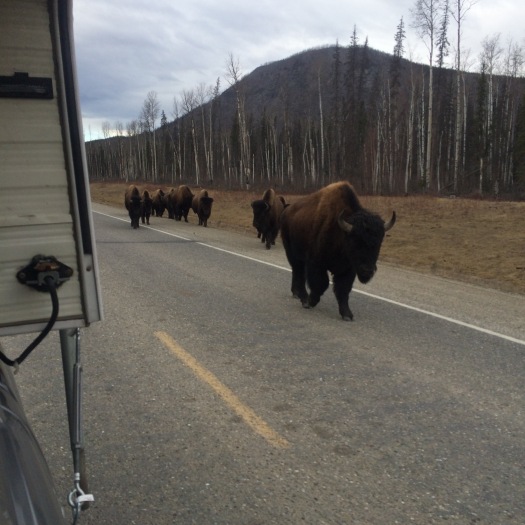 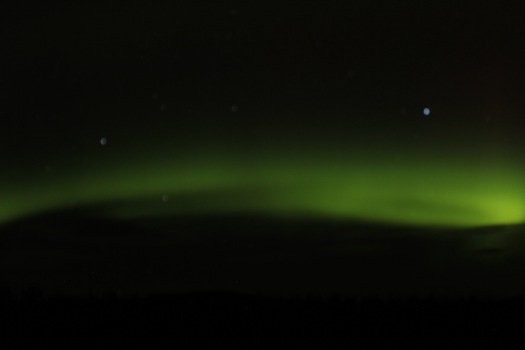