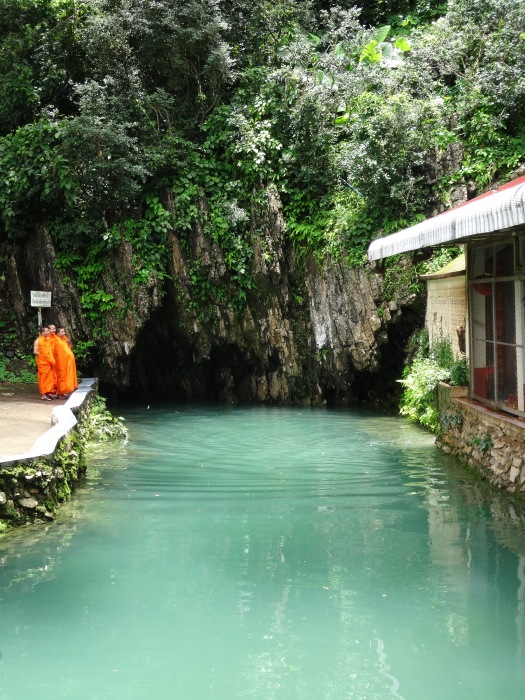 Just a couple hours north of Chiang Mai is a town called Chiang Rai. Majority of tourists are attracted to this town because of the beautiful White and Blue Temples as well as the Baan Dam (Black House) Museum. Others are also drawn here because it serves as a gateway to Laos (a common trip for visa runs) as most buses go through Chiang Rai to get to the border.

We hopped on an air-conditioned green bus from the Arcade Bus Station in Chiang Mai for just 129 baht per person (just under $4 usd). The ride took about three and a half hours, a little curvy but not as winding as the road to Pai was.

Our hostel (Bus Station 1 Hostel) was situated a whopping 100ft or so from the bus station, and on the other side of the hostel the night market welcomed us each night with live music, dancing and wonderful fresh cooked food! Lucas FINALLY found some reasonably priced chicken wings he’d be looking for since we left Hawaii!

Our first night as we settled into our hostel, we made a plan for the next couple days which would consist of visiting a monkey cave, the Black House Museum, the Blue Temple, Pong Phra Bat hot spring, the White Temple and lastly Khun Korn Waterfall. We had our route now all we needed was a motorbike to get us there. We woke the next morning and ventured out to find our wheels for the next few days. The cheapest rental we could find ended up being 150 baht for 24 hours ($4.50). We signed our rental agreement, filled up our fuel tank and off we went on a scenic drive up to our first stop, Monkey Cave! 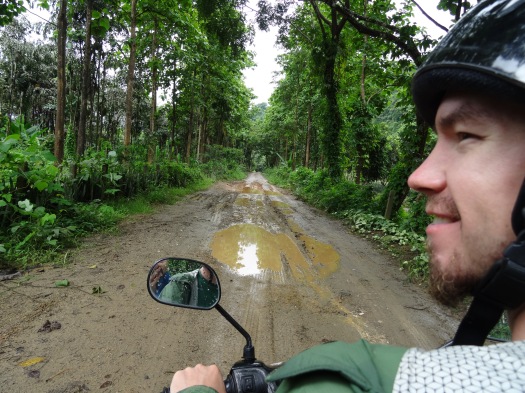 Typing in Monkey Cave on maps.me (a offline maps app) sent us way north towards the border of Myanmar. As we pulled into what we thought was “Monkey Cave” it started pouring down rain and there were no monkeys at all to be found! We thought for sure we had driven to the wrong place (later we found out it was the wrong place!). Although there was a cave, called Wat Tham Phra, the entire complex seemed to be completely empty, no monkeys, no monks, no people at all. Kind of strange and eery but Lucas went in the cave  anyways and explored for quite a while as the cave was fairly extensive and was pitch black (I opted out of this little cave exploration part). This area had some amazing scenery and in our opinion is worth the drive up from Chiang Rai. On the way back to find the actual “Monkey Cave” maps.me took us on a back road that was supposed to be shorter and more scenic. It took us through some beautiful farmlands, past some amazing limestone cliffs and down a incredibly muddy dirt road. With two people on one motorbike it was quite the adventure for sure! 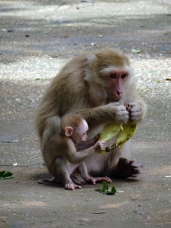 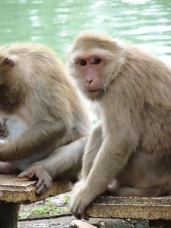 We finally made it to our original destination that was actually called Wat Tham Pla (Fish Tail Cave/Monkey Temple) not Monkey Cave…. oops! There were tons of Monkeys here, tons of fish, and Monks in there traditional orange attire! A wonderful short trip from Chiang Rai! Here you could feed the hundreds of fish in the pond or feed the Macaque monkeys! This was our first time being up close and personal to monkeys, at first we were very intimidated by them but after spending some time in one area they seemed to get used to us a little. There were baby Macaque’s that were only a couple weeks old and were SUPER CUTE! 🙂 After spending some time with the monkeys we headed up the winding steep stairs to a nice little cave and a viewing platform. Lucas and I were the only people up there which at one point got a little scary because as we looked up there were about a dozen monkeys climbing down the rock walls towards the cave entrance. Some of which were very sizable and soon we felt like we were being held hostage in the cave with the wild monkeys stopping us from leaving. We waited for several minutes and soon they lost interest and made there way down to the fish ponds where everyone else was situated. Bare in mind this type of monkey has large sharp teeth and at times can be aggressive. We read a few stories online where when feeding them they get aggressive and will actually sometimes bite you so I would suggest grabbing one of the sticks they offer you at the entrance and walk around with it like most other people had.

As we finished up at the Wat Tham Pla we made our way down to Pong Phra Bat Hot Springs. We had plans to stop at the Black House Museum but since we lost a few hours going to the wrong cave we decided to opt out of stopping there and head straight to the Hot Springs to save us a little time. For just 20 baht (.60 cents usd per person) we had a nice relaxing stop, soaking in the natural hot springs and enjoying a break from riding the motorbike. 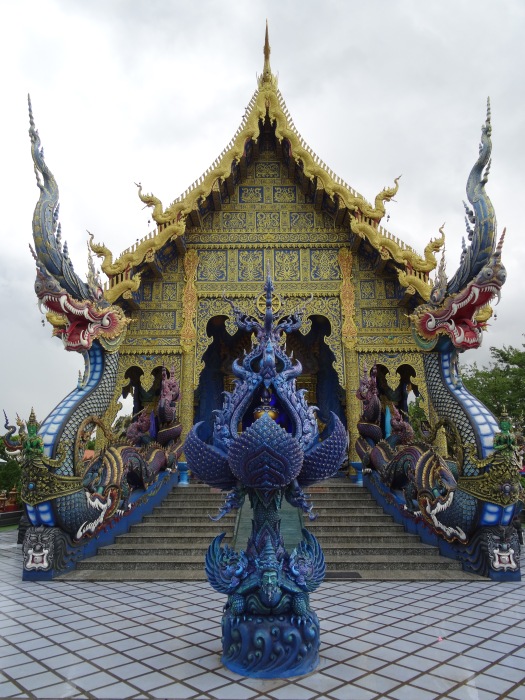 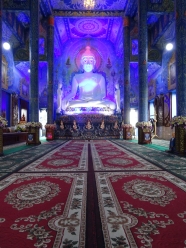 Next on our loop that day we drove to the amazing Blue Temple (free admission) and White temple (50 baht admission) Both were incredibly beautiful. Its amazing how much detail goes into the design of these temples. Both of these are must do’s if your in Chiang Rai! 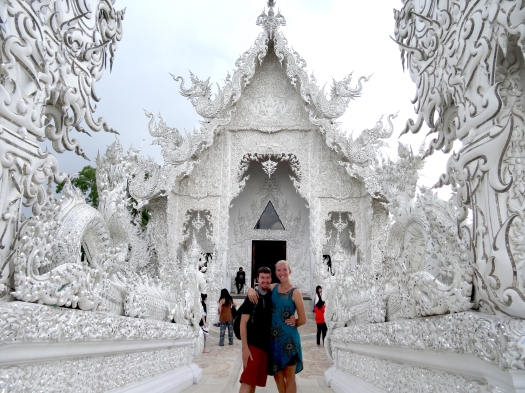 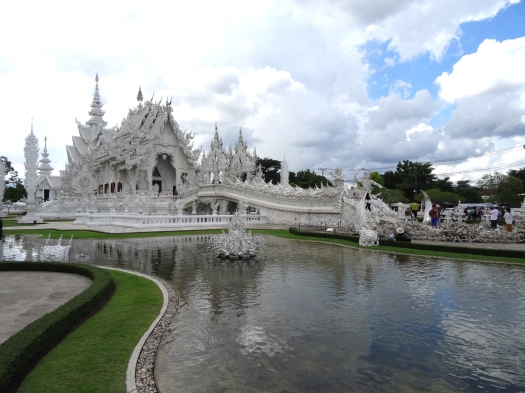 Last on our list for Chiang Rai was to see the Khun Korn Waterfall. We have seen so many beautiful waterfalls on our travels, but we are so glad that we made the long drive to this one as it was so much nicer than we had anticipated it being! We had a short hike from the parking lot (about 1400m hike) in which we got stuck in a complete unexpected downpour! As we made it to the waterfall the rain let up allowing for a few quick pictures. The waterfall was incredible, I’m sure all the recent rain helped with the size of it but it was still a wonderful adventure and for just the cost of a motorbike rental and fuel it was a cheap day trip outside of Chiang Rai!

Chiang Rai has plenty to offer for anyone! Great food, beautifully designed temples, amazing waterfalls, hot springs and Monkeys! We thoroughly enjoyed our excursion up to this small town and highly suggest others to make a trip up as well if your time allows it.